Gold in colour, this is an exotic and intense wine with funky volcanic minerality, wild mountain fruits and a hint of apricot culminating in a leesy, wet stone finish.

PRODUCER NOTE:
This small, authentic boutique winery on Mount Etna, was established by Giuseppe “Peppino” Mulone in 1954. Santa Maria la Nave grows indigenous varieties such as Nerello Mascalese and Nerello Cappuccio in an ancient vineyard with rich, fertile volcanic soils. Passion and respect for the unique microclimate, along with artisanal vinification are at the heart of the Santa Maria La Nave project. Produced in small quantities, from dramatic surroundings, these are exquisite, food friendly wines.

VINEYARD:
The tiny one-hectare vineyard is situated on the north western slopes of Mount Etna, at an altitude of 1,100 metres – one of the highest vineyards in Europe. Following a 15 year massal selection of local plants, the Grecanico Dorato vines planted are from several ancient clones grafted on Richter 110 and Paulsen 1103 rootstocks. The climate provides warm, dry days during the summer, with significant diurnal temperature variation during the ripening period; during the summer the day time temperatures can reach 35°C and drop to just over 1°C at night, encouraging a gradual ripening process resulting in rich flavours, balancing acidity and aromatic complexity. The highly organic soil has significant residues of old lave flow, imparting marked minerality in the resulting wine. The vines are predominantly trained on the Guyot trellising system. The vines are farmed using organic methods and is in conversion to organic certification. Manually harvested.

WINEMAKING:
The grapes were destemmed and gently pressed, obtaining 60% of first pressed juice. The must was cold settled at 10°C for 36 hours prior to being inoculated with indigenous yeasts. Alcoholic fermentation took place at 18 to 20°C, preserving the aromatic content. The wine was then racked, followed by a weekly stirring (bâtonnage) of the fine lees. The cool temperatures stabilised the tartaric acid, making the final wine less acidic and softer on the palate. After a light clarification and filtration, the wine was bottled and aged for several months.

TASTING NOTE:
A bright and fine example of Grecanico Dorato, delivering an explosive aromatic entrance. Etnean apple gives way to delicate accents of white peach, pineapple and citrus notes. Vanilla and white pepper is underpinned by its distinctive minerality. Dry, with a balanced acidity, this elegant and harmonious wine has a lovely persistent finish. 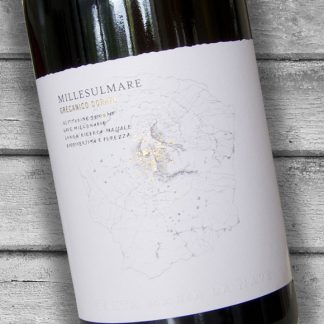