A lovely example of a generously flavoured Gamay with bramble and plum fruit and a soft, rounded finish.

VINTAGE
2018 was an excellent vintage throughout Beaujolais, similar to 2017, 2015 and 2009. The early months of the year experienced heavy rain showers which replenished the soil’s water reserves. The summer was hot and dry, which allowed the berries to ripen slowly and regularly; and the vines to maintain excellent health. Despite the hot temperatures, overall the vines did not suffer from drought due to the ample water supply provided in the spring. Ideal conditions at harvest resulted in healthy, ripe grapes high in sugar and showing beautiful concentration.

VINEYARD:
The grapes come from vineyards within the Beaujolais Villages appellation which is made up of 38 villages in the northern Beaujolais region. The climate is continental with cold winters and warm summers. The 20 year old vines are grown in granite, clay and chalky soils, which provide good drainage and are free standing bush vines pruned according to the traditional Gobelet method. The grapes are hand-harvested.

WINEMAKING:
This Beaujolais Villages was vinified in the traditional way, with a semi-carbonic maceration lasting for six to eight days. Fermentation was temperature controlled throughout and was followed by malolactic conversion, resulting in a softer style of wine.

TASTING NOTES:
A lovely example of a generously flavoured Gamay showing intense aromas of red and black berried fruits, with notes of cassis. Beautifully balanced with an unctuous texture, silky tannins and a soft, mouthwatering finish. 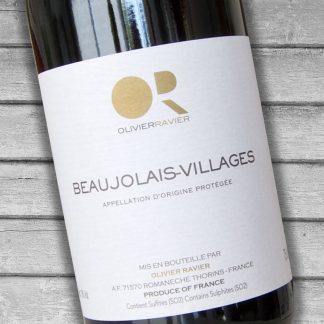