A round and creamy Champagne with subtle hints of brioche and sweet spice combining with citrus flavours and floral fragrances, with nuances of toasted nuts and honeycomb. Beautifully balanced with a long, opulent finish.

PRODUCER NOTE:
Pol Roger is one of the few remaining great family-owned Champagne houses. An unrivalled reputation within the trade has been guaranteed by the consistent excellence of the wines: a tribute to the incredible diligence of the selection of the cuvées directed by members of the Pol Roger and de Billy families, in conjunction with the Président du Directoire Laurent d’Harcourt and the Chef des Caves, Damien Cambres. With stock equivalent to five years normal sales, a major investment programme, and among the coolest and deepest cellars in Epernay, the Pol Roger range of Champagnes offers a glimpse of the sublime.

VINTAGE:
On the whole winter was mild and dry; however there was a cold snap at the beginning of February. Following cool and rainy weather in early spring, unseasonal warm weather prevailed in late March, favouring an advanced budbreak. This was followed in turn by rain, mild weather and five spells of frost in April and May, of which two gave cause for concern. Furthermore, some vineyards were hit by hail on a number of occasions. These climatic challenges made for great variation in the development of the grapes. Hot, sunny weather from late July through to the first days of September, ensured that the grapes reached an ideal maturity. The yields were low, but the grapes were in excellent health. Harvesting lasted from 10th to 26th September.

WINEMAKING:
The Cuvée Sir Winston Churchill is made only in the very best vintage years and is always released later than other vintage dated Champagnes from Pol Roger, a reflection of Churchill’s appreciation for older wines. The must underwent two débourbages (settlings), one at the press house immediately after pressing and the second, a débourbage à froid, took place in stainless steel tanks at 6°C over a 24 hour period. Fermentation took place in stainless steel tanks at temperatures not exceeding 18°C, with each variety and each village kept separately until final blending. The wine underwent full malolactic conversion. Secondary fermentation took place in bottle at 9°C in the lowest Pol Roger cellars (33 metres below street level) where the wine was kept until it underwent remuage (riddling) by hand, a rarity in Champagne nowadays. Dosage: 9g/l.

TASTING NOTE:
This was created in homage to Sir Winston Churchill who was a great devotee of Pol Roger’s Champagnes. The wine has an inviting, bright golden hue, and a fine, regular stream of bubbles. A round and creamy Champagne with subtle hints of brioche and sweet spice combining with citrus flavours and floral fragrances, with nuances of toasted nuts and honeycomb. Beautifully balanced with a long, opulent finish. 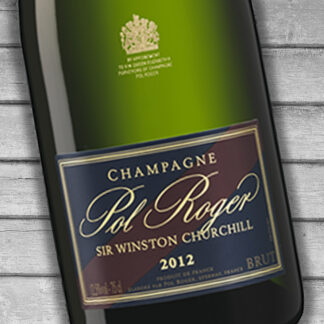