A rich yet juicy wine full of fleshy black fruit flavours with a hint of vanilla, warm and savoury.

PRODUCER NOTE:
Domaine des Cigalounes is a small seven hectare property, located on the rocky plateau between the villages of Tavel and Lirac on the opposite bank of the Rhône from Châteauneuf du Pape.

VINTAGE:
A mild winter was followed by a dry spring, which promoted early budbreak. April and May experienced a cold snap with frost, which reduced yields. 2019 was a hot growing season, as sizzling heatwaves from late June to July, resulted in drought conditions throughout much of the region. Some localised hail storms brought with them rain, which helped to refresh the vines. Harvesting took place in September, producing rich, concentrated wines, but with balancing natural acidity, which suggests the vines had periods to rest.

VINEYARD:
Lirac is an appellation on the western side of the southern Rhône Valley. Domaine de Cigalounes is a seven hectare property which has been certified organic since 2012. It is located on the rocky plateau between the villages of Tavel and Lirac, on the opposite bank of the Rhône from Châteauneuf-du-Pape. The vines are grown according to traditional philosophies, in red soils with a pebbly topsoil.

WINEMAKING:
Winemaker, Emmanuelle Gauthier as a non-interventionist, looks for finesse and silky tannins, rather than over-extraction. The grapes were hand-harvested at optimum maturity and sorted to ensure only the highest quality fruit was vinified. Each variety was fermented separately with selected yeasts in temperature controlled stainless steel tanks, lasting for three weeks. 20% of the blend was matured in barrel imparting subtle complexity. 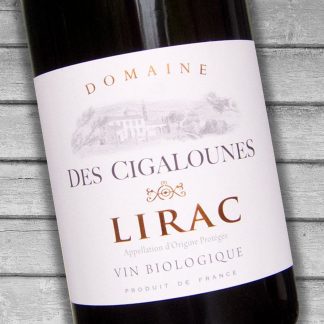