Appealing notes of smoky cooked plums with spice and pepper through to a supple and lingering finish.

PRODUCER NOTE:
Situated in Nashik, India’s largest grape-growing region, Sula Vineyards was set up in 1997 by Rajeev Samant & Kerry Damsky. They pioneered the growing of the French grape varieties Sauvignon Blanc and Chenin Blanc, which were first released in 2000 to wide acclaim as India’s best white wines. Sula now cultivates Shiraz and Zinfandel amongst other international varieties and is broadly recognised as India’s premium wine producer. At Sula, they believe in being a steward of the land and follow sustainable practices. As an eco-friendly company, a significant amount of resources is committed to sustainable winemaking practices and ensuring fair livelihoods for Sula’s community of farmers across Maharashtra and Karnataka. A large number of Sula’s workers come from disadvantaged communities and have seen a significant change in their standard of living through their employment with the company; this has been nothing short of a revolution in the surrounding villages.

VINTAGE:
The 2020 vintage was quite challenging. Mid-season rainfall particularly post véraison resulted in some fruit damage in certain areas. The resulting wines are light to medium bodied with delicate aromatics and fruit. However, the fruit not affected by the damage is of very good quality, with rich concentration of fruit, resulting in balanced wines.

VINEYARD:
Since its inception Sula has been working to integrate a wide array of measures at its 97 hectare estate vineyard and within its winery to minimise the environmental impact of not only its farming, but also its processing and distribution practices. In the vineyard the vines are trained on a high trellising system, which maximises airflow. The red soil is composed of clay and gravel, which has a high iron content and offers the vine good drainage.

WINEMAKING:
The grapes were fermented with selected yeasts in temperature controlled stainless steel tanks in order to preserve the varietal characteristics of Zinfandel.

TASTING NOTE:
Fruit driven, appealing and youthful, this Zinfandel shows aromas of red berries, blackberry and plum with a hint of cinnamon. A beautifully balanced medium bodied wine with supple tannins and a lingering finish.

Be the first to review “Sula Vineyards – Zinfandel – 2020” Cancel reply 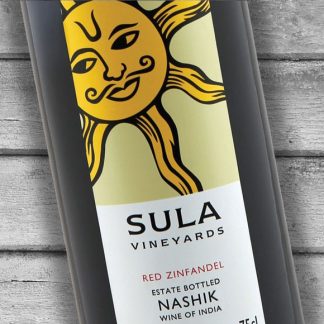