PRODUCER NOTE:
Founded by the Mendez Family in 2002, the Pazo do Mar winery is dedicated to the production of Galician wine from the native varieties of Albariño, Treixadura, Godello and Mencia. The vineyards are situated 150 metres above sea level on slate and granite soils and are influenced by the Atlantic Ocean. This family-run estate aspires to find the perfect balance between traditional values and an innovative and modern approach to winemaking, resulting in a collection of stunning wines with freshness and personality.

VINEYARD:
Produced from a single vineyard site on granite and sandy soils, which impart minerality and a fresher style to the wine. The vines are trained on a trellis which gives the grapes more aeration, leading to an optimum maturation of the berries and less acidity in the wine. Only 2% of Albariño is planted this way due to higher costs for cultivation and reduced yields.

WINEMAKING:
Harvested by hand, the grapes were cooled to 8°C for eight hours. The grapes were then carefully sorted and cold macerated on the skins to extract varietal character and body. The must was racked after six to eight hours at low temperatures and fermented in stainless steel vats at 17°C for three to four weeks. The wine was kept in contact with its lees for two months and malolactic conversion was prevented to retain the crisp character of this wine.

TASTING NOTE:
This estate grown and bottled Albariño shows stone fruit characters with delicate spicy notes on the nose, which are echoed on the palate along with citrus characters. This poised wine is all held together by a crisp backbone of refreshing and zesty acidity. 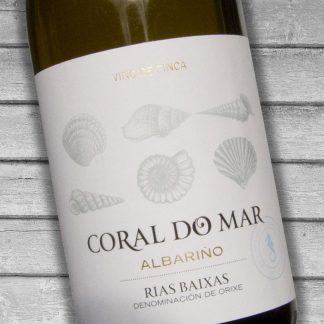