A silky Fleurie with subtle floral aromas surrounding a core of fresh red fruits enhanced by nuances of fennel and graphite on the finish.

VINEYARD:
Fleurie is one of the 10 Beaujolais Crus and is renowned for the elegance and finesse of its wines, which is linked to the pink granite soils. The vines which produce this wine have an average age of over 40 years old and these old, gnarly Gobelet trained vines thrive in granitic and sandy soils, which accounts for the aromatic finesse of this cuvee. The grapes are hand-harvested at optimal ripeness.

WINEMAKING:
The grapes were vinified in the traditional way, with a semi-carbonic maceration lasting for 10 to 12 days. Fermentation was temperature controlled throughout and was followed by malolactic conversion, resulting in a softer style of wine.

TASTING NOTES:
Quintessential Fleurie with subtle floral aromas surrounding a core of deep red fruits. The palate is full of finesse, with a rich and silky texture and an attractive hint of bitter cocoa on the finish.

Be the first to review “Olivier Ravier – Fleurie – 2021” Cancel reply 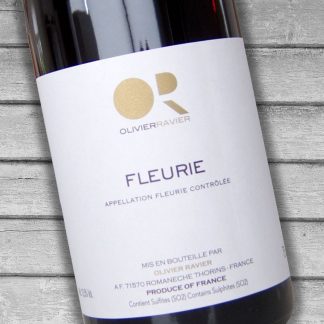