VINEYARD:
Brouilly is the largest and most southerly of the 10 Beaujolais Crus. The vineyard is situated at the foot of the volcanic Mount Brouilly. The climate is a semi-continental; winters are cold and summers are generally warm. Due to its southerly location, Brouilly tends to produce riper fruit flavours than the other Crus. The 20 year old vines are grown in granite soils which provide excellent drainage for the vines. The vines are free standing bush vines pruned according to the Gobelet method.

WINEMAKING:
The grapes were hand-harvested at optimal ripeness and underwent a temperature controlled semi-carbonic maceration, lasting between eight to 10 days. The wine was pressed and 100% underwent malolactic conversion, resulting in a softer expression on the palate. The wine was made in an unoaked style to retain the purity of fruit.

TASTING NOTES:
An elegant Brouilly showing concentrated aromas of black berried fruits, especially black cherry and a hint of spice. Ripe and vibrant black fruits are echoed on the palate, which is structured with soft tannins and a charming, silky finish.GRAPE:
GRAPE:
Gamay 100%

Be the first to review “Olivier Ravier – Brouilly – 2019” Cancel reply 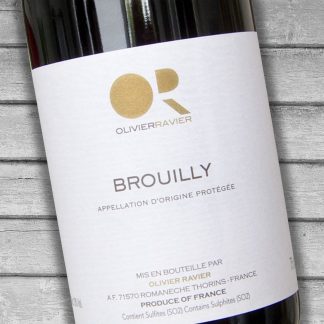