A lovely wine from the South of France showing chunky olive and liquorice flavours with vanilla notes, spicy and intensely flavoured.

PRODUCER NOTE:
Gérard Bertrand is one of the most outstanding winemakers in the South of France, where he owns numerous estates among the most prestigious crus of LanguedocRoussillon. Formerly the IWC Red Winemaker of the Year and Wine Enthusiast’s European Winery of the Year, he is known locally as the “King” of the Languedoc. Brought up in the Languedoc vineyards, Gérard Bertrand is committed to sharing the characteristics and exceptional diversity of each of the terroirs. 20 years of expertise ensures that wines bearing Gérard Bertrand’s signature have a unique style, driven by the values of excellence, authenticity, conviviality and innovation. In 2020, Gérard Bertrand was awarded Green Personality of the Year, by the Drinks Business Green Awards. We are proud to represent this leading French name in the UK.

VINTAGE:
2019 marks a return to a more Mediterranean profile than the previous year. There was less rain than in 2018; the rain fell mainly in autumn and winter, with a marked absence during the summer which experienced a series of heatwaves. Managing the water levels was a key issue in the vineyards. The vines were in excellent health at harvest and the grapes reached good levels of maturity.

VINEYARD:
In the Héritage range, Gérard Bertrand highlights the history and the expression of the terroirs of the South of France, by celebrating a date which has marked the history of the appellation. Saint-Chinian is a highly reputed village in the Languedoc region where vines have grown since the Middle Ages. 1877 pays tribute to the time when the steam engine and the first Saint-Chinian railway enabled the wines to be transported from the regions to capital cities, revolutionising the area. The vineyard is planted on the sun-kissed slopes of sandstone and schist and benefits from a cool micro-climate. Only the grapes from the plots best suited to producing this type of wine were used in this cuvée. The majority of the grapes were hand-harvested.

WINEMAKING:
The grapes were carefully picked and sorted twice, once on the vine and again in the winery. Vinification was traditional; the grapes were destemmed prior to fermentation and maceration which lasted between three to four weeks. The wine was then pressed, followed by malolactic conversion. One third of the wine was matured in barrels for nine months, with the remainder aged in vats. 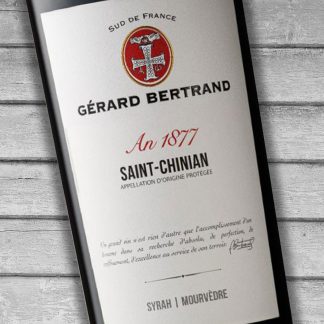