Densely coloured with earthy and eucalyptus notes enhanced by hints of coffee. Textured, smooth and long.

PRODUCER NOTE:
Gérard Bertrand is one of the most outstanding winemakers in the South of France. A biodynamic pioneer, he owns numerous estates among the most prestigious crus of Languedoc-Roussillon. Formerly the IWC Red Winemaker of the Year and winner of Wine Enthusiast‘s European Winery of the Year, Gérard has been cited as the “King of the Languedoc” among critics. Clos d’Ora is considered to be his ‘first growth of the Languedoc’ and is Gérard Bertrand’s masterpiece. It took him and his team 17 years to create this wine. Exceptional terroir, scrupulous berry selection and a biodynamic approach and philosophy result in a wine that is dense, textured, smooth and long.

VINTAGE:
2016 was characterised by warm and sunny weather during the summer with cool, fresh nights. Dry conditions helped to keep the vines healthy. The lack of rainfall in some regions resulted in smaller yields of concentrated juice. Rainfall in September alleviated water stress, resulting in good quality wines with great flavour intensity.

VINEYARD:
This nine hectare vineyard, enclosed by dry stone walls, is located at La Livinière in the Minervois at an altitude of 220 metres above sea level. At Clos d’Ora, Bertrand has opted to use biodynamic methods for working the vines, using horses and mules to foster connections between minerals, vegetables, animals and humans. The soils are composed of chalk, sandstone and marl. Leaf thinning takes place before the harvest and the grapes are entirely hand-picked.

WINEMAKING:
Each grape variety and each parcel was macerated in separate batches in unlined, thermoregulated precast concrete vats. The Syrah grapes were destalked, vatted and vinified. The Grenache and Mourvèdre were destemmed and lightly crushed before vatting under strict temperature control. They underwent a very gentle maceration in order to limit the extraction of tannins, with some pumping over for aeration and humidification of the cap only. Finally, the Carignan grapes were whole bunch fermented at higher temperatures to extract the maximum of aromas. The wines then spent 12 months in French oak barrels. The wines were blended after the Spring Equinox, first the Syrah, then the Grenache, Mourvèdre and Carignan.

TASTING NOTE:
Deep garnet in colour, Clos d’Ora is characterful, opulent and distinguished with a full and intense palate. Notes of deep black fruits envelop the mature and textured tannins, through to a long, sophisticated finish. Excellent ageing potential. 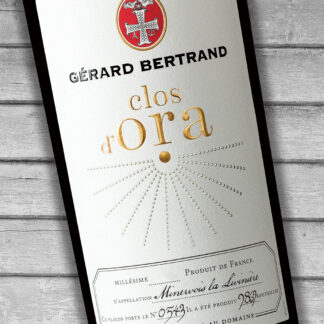