PRODUCER NOTE:
Gérard Bertrand is one of the most outstanding winemakers in the South of France. A biodynamic pioneer, he owns numerous estates among the most prestigious crus of Languedoc-Roussillon. Formerly the IWC Red Winemaker of the Year and winner of Wine Enthusiast‘s European Winery of the Year, Gérard has been cited as the “King of the Languedoc” among critics. Acquired in November 2011, Château la Sauvageonne is located northwest of Montpellier. With a long winemaking history, this Château is a legendary site. The combination of its orientation, its situation on the Larzac terraces at 300 metres altitude and the exceptional volcanic terroir, produces stunning wines of unique character.

VINTAGE:
2020 will be remembered for its extraordinarily changeable climate. The mild, wet winter generously replenished groundwater reserves, allowing budbreak to occur early. The warm, wet spring beat all records for temperatures and rainfall, stimulating intense growth, good foliage development and early flowering. The typically Mediterranean summer, with the absence of rain and high temperatures, allowed the vines to mature serenely. Harvesting began on August 18th, 10 days ahead of usual, with each variety being picked at optimal maturity. 2020 promises to be an exceptional vintage.

VINEYARD:
The estate is located to the North West of Montpellier, situated on the terraces of Causse du Larzac at between 150 and 350 metres of altitude. The vineyard’s orientation, combined with its exceptional terroir gives it a unique character. The landscape is moulded by the region’s volcanic past. The soil consists of stones derived from sandstone or schist for the first 30 centimetres and then a layer of clay. Specifically the soil is made up of “Ruffes” which is a thin, filtering soil rich in minerals such as bauxite, iron and aluminium; and sandstone with shale, which allows the creation of a water reserve. The area is influenced by wide temperature ranges, with warm, sunny days and cooler, fresh summer nights influenced by the sea breeze. These diurnal temperature differences are beneficial encouraging a slow, progressive ripening of the berries.

WINEMAKING:
The grapes were hand-picked between sunrise and 10am, in order to retain freshness. The Grenache and Mourvèdre came from plots of old vines on the hillsides, which produce low yields of small berries. The Vermentino and Viognier are cultivated on the schist hillsides. The Grenache was co-fermented with the Vermentino and the Viognier. Full bunches of grapes were immediately pressed and only the free run juice and the juice from the first press were used. After a cold settling, the fermentation began in vats with natural yeast, followed by a partial fermentation in oak. 80% was matured in French oak.

TASTING NOTE:
A bouquet of crushed strawberries and sweet spice is complemented by floral notes of violet and hawthorn. Powerful and generous, with a velvety texture and a revitalising freshness, this wine is built on tension and stamped with a brilliant salinity. 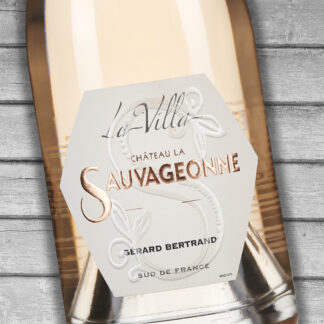