A luscious and intensely sweet dessert wine showing ripe figs, toffee and molasses through to a nutty finish.

PRODUCER NOTE:
One of the pioneers of the modern Greek wine revolution Gaia Estate was established in 1994 by Greek winemakers Leon Karatsalos and Yiannis Paraskevopoulos. Operating two different wineries they make cutting edge wines in both Nemea and Santorini. Gaia’s main aim is to present the potential of the indigenous Greek grape varieties to wine enthusiasts worldwide.

VINEYARD:
The Assyrtiko (pronounced Ah-SEER-tee-koe) grapes are hand-harvested when they have reached the optimum maturity and ripeness, but they undergo a variation on the traditional vinification process. A portion of the grapes are sun dried in the strong Santorini summer sun while another portion is dried in the shade to maintain relative fruit freshness.

WINEMAKING:
Once the berries were sufficiently dehydrated from the sun, they were gently pressed over many hours until the last drop of the richly concentrated must was rendered. Yields at this stage were exceptionally low – less than 10 hectolitres per hectare. The must was then placed in old casks where it underwent fermentation which stopped once the alcohol level reached 13 to 14%, thus producing a naturally sweet wine. The wine was then left to age in the fermentation casks previously used for white wine production for at least 10 years. This Vin Santo was bottled without any fining or filtration.

TASTING NOTE:
Deep honey in colour, this is complex and full flavoured with notes of toffee and caramel. A rich, luscious and beautifully balanced dessert wine. 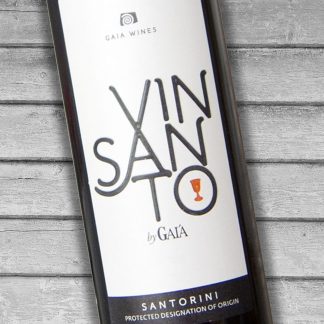