A full-flavoured organic 1er Cru Chablis with hazelnut and frangipan notes through to a mouthwatering and linear finish.

PRODUCER NOTE:
Domaine Jean Goulley was formed in 1986 by Jean Goulley and is now run by his granddaughter Maud. In January 2022, Maud took over from her father Philippe, who was involved in the estate for nearly 40 years. The family owns 4.5 hectares in the Premier Cru appellations, which are the heart and soul of the Domaine. They own approximately 18 hectares in total. In 1991, the Domaine became one of the very first certified organic producers in Chablis. All of the vineyards are farmed organically and the wines are produced with restricted use of sulphur. The Goulley family believes the organic farming methods permit an expressive and sustainable soil. Their wines are mineral, pure and lively.

VINEYARD:
Mont de Milieu is a 1er Cru vineyard site located on the eastern banks of the Serein River and produces age-worthy wines from this exceptional terroir. The vines are planted in Kimmeridgian soils, which are rich in clay and limestone with fossilised seashells. Domaine Goulley’s old Chardonnay vines were planted in 1968 and were converted to organic status in 2005, since then it has been cultivated without the use of chemical treatments. The vineyard has a south to southwestern exposure and sits at 150 to 190 metres elevation which encourages good diurnal temperature differences, encouraging the grapes to accumulate good fruit concentration while retaining refreshing natural acidity from the cooler nights.

WINEMAKING:
The grapes were harvested at optimum maturity and were fermented with natural yeasts at controlled temperatures. During fermentation the temperature was maintained at a maximum of 21°C; then it was reduced to between 18 to 20°C during malolactic conversion. The wine was matured for 18 months in stainless steel vats at 14°C, of which the first nine were on the fine lees to impart complexity and texture. It was made without oak influence to retain the purity of fruit and to let the characteristics of the Premier Cru Mont de Mileu terroir shine through. 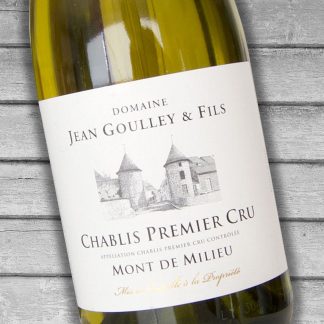