A creamy and silky white with juicy white pear with vanilla hints and delicate notes of zesty lemon and pineapple.

PRODUCER NOTE:
Domaine Ferrand is run by Nadine Ferrand who has managed the estate since 1984. Through her courage, determination and intuition she has developed and transformed the 10.5 hectare vineyard in the heart of the Pouilly Fuisse. In 2012, Nadine was joined by her eldest daughter Marine, the fourth generation to work in the family business. Having worked in the wine industry in the United States, Marine has brought with her innovative ideas while continuing the family philosophy of “expressing Chardonnay with a feminine touch”. Domaine Ferrand holds the Haute Valeur Environmentale (HVE) certification, which officially recognises the environmental performance of winegrowers, including biodiversity conservation, plant protection strategies, managed fertiliser use and water resource management.

VINTAGE
2019 has been cited as an outstanding vintage and one of the best in recent years. The dry, warm conditions produced low yields of impeccably balanced, concentrated wines with searing freshness and remarkable purity. A mild winter was followed by a chilly spring, with frosts affecting some areas. Cooler temperatures in June resulted in uneven flowering and some millerandage in some vineyards. However, temperatures soared in July and August with vines under hydric stress, resulting in superb concentration of flavours.

VINEYARD:
Saint Veran is an appellation for dry white wines made from Chardonnay, which is situated in southern half of the Maconnais subregion of Burgundy. The Domaine Ferrand vineyard is situated in the village of Solutre Pouilly, on eastern and south eastern facing sunny slopes at an altitude of 250 to 300 metres above sea level. The vines have an average age of 50 years, with deep root systems penetrating the layers of soil, imparting complexity to the resulting wine. The soils are clay and chalk from the Jurassic period.

WINEMAKING:
The grapes were harvested by hand and carefully sorted. Traditional vinification followed: the grapes were pneumatically pressed and fermented with wild yeast in stainless steel vats at low temperatures. The wine was made in an unoaked style to express the terroir and purity of fruit. Once fermentation was complete, the wine was racked, blended and bottled in order to retain the fresh style.

TASTING NOTES:
This is a refreshing, complex and silky white from Saint Veran. Ripe fruit flavours of juicy white pear combine with delicate notes of zesty lemon. Softly textured, with a harmonious balance between refreshing acidity and fruitiness, this shows great finesse on the finish 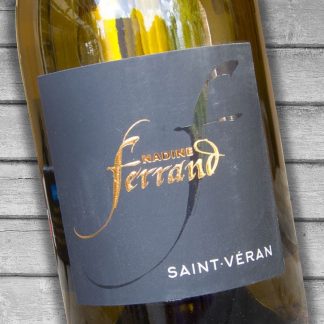