PRODUCER NOTE:
The Collio region, a strip of hills bordering Slovenia, is reputed to have one of Europe’s most privileged micro-climates for white wines, while the red wines are also noted for their appeal. Founded by Eugenio Collavini in 1896, this family owned house is now run by Manlio Collavini together with his three sons. Located in Udine, they were among the first to vinify Ribolla Gialla-an ancient local variety- and to implement new winemaking technologies. Collavini prides itself on its clean, modern style wines, while still retaining the traditions and grape varieties native to the area. Collavini’s ‘Broy’ is a multiple Tre Bicchieri winner and is recognised as one of Italy’s top white wines. As keen dog lovers, the Collavini’s very first pet Dachshund ‘Ribolla’ is portrayed on the label.

VINTAGE:
2018 was a very good vintage for Collavini. The winter was rainy, but not extremely cold. Spring was warmer than usual with significantly low rainfall in April. The summer was hot, but saw frequent rainfall which helped to nourish the vines. Harvest took place during mid-August through to mid-September under good conditions which enabled the grapes to remain on the vine reaching maximum maturity, resulting in ripe, even clusters of excellent quality.

VINEYARD:
The vines are grown in the municipal territories of San Floriano del Collio e Cormòns in DOC Collio. The Collio Goriziano’s marl and sandstone soil nurtures the vines and produces aromatic wines. The soils offer a good balance of water retention to nourish the vines throughout the summer and ample drainage if required. Gentle sea breezes come from the Adriatic Sea which keep the vines dry and healthy, while the Alps protect the vineyards from cold, northerly winds. Warm days and cool nights offer the perfect combination to allow slow maturation of the grapes, maintaining beautiful balance between natural acidity and sugar levels. Planted at a density of 4,500 vines per hectare, the vines are trained according to unilateral and bilateral Guyot methods.

WINEMAKING:
Collavini’s flagship white wine. The grapes were picked from overripe bunches and then laid on drying trays. The Friulano and Chardonnay berries were dried at temperatures of between 6 to 8°C in a modern, ventilated drying room with almost zero humidity, where they lost between 15 to 20% of their water content, concentrating the sugar content in the grapes. The Sauvignon Blanc grapes were pressed separately, after brief skin contact and were then chilled to block fermentation. The three musts were blended and fermented in steel tanks, followed by maturation on the fine lees until the summer following the harvest.

TASTING NOTE:
Intense aromas of ripe tropical fruits, acacia honey, orange peel and summer flowers open on the nose. Softly textured with a warm palate, this is beautifully balanced by freshness and minerality through to an exquisitely long finish. 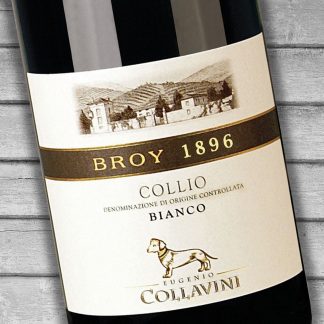