A naturally produced rich and muscular wine with an appealing earthy nose of chunky red cherries and a touch of minerality.

PRODUCER NOTE:
The Chateau de Grand Pre comprises a beautiful 18th Century castle complete with vaulted cellars, a “lieu dit” vineyard and an eight hectare family domain in the Beaujolais region. The winery is located in the heart of Fleurie where they own six hectares of vineyard, with a further two hectares in the village of Morgon. When Louis and Renee Bertrand bought the domain in 1972, the vines were old and the cellars were in ruins. They took the estate in hand and gave it a new lease of life, replanting and rebuilding. Today it is run by their grandson Romain Zordan, who has brought a modern and organic approach, with sustainable cultivation in the vineyard. The estate has been certified organic since 2012. Naturally vinified, these wines are a true expression of their Beaujolais terroir.

VINTAGE:
In terms of the weather, 2019 was an unpredictable vintage in the Beaujolais region, with sharp frosts in April, followed by erratic hailstorms reducing yields across the region. Hot weather lasted throughout the summer and included some temperature highs of 40°C. Welcome rain fell at the end of August, preventing the vines from suffering hydric stress. Yields were reduced, but the grapes reached excellent ripeness and have produced richly concentrated wines with fine, balancing acidities.

VINEYARD:
Morgon is one of the 10 Beaujolais Crus and the Morgon terroir is very complex. Located on the smooth slopes of Mont de Py, the soil consists of blue volcanic shists, sand and the Saone’s river sediments, which impart the wine with more power and structure than the other Crus. Chateau de Grand Pré farms organically. The vines are pruned very precisely into a Goblet shape and a green harvest, results in a higher concentration of flavour in the berries. The vines are over 40 years old, so yields are very low at approximately 35 hectolitres per hectare. The soil is made of decomposed rock and crumbly schist. Grass is maintained in between the rows, in order to preserve the natural ecosystem of the vineyard. The grapes were harvested by hand at optimal ripeness.

WINEMAKING:
Vinified with minimal intervention. Carbonic maceration took place for 15 days, a slow process in order to gently extract the complexity of aromas. Sulphur was not added during the vinification process and only minimal sulphur was added at the time of bottling. Natural yeast fermentation took place at controlled temperatures. The wine was then aged for several months in small French oak barrels and demi-muids (650 litres). This wine may leave a light deposit resulting a slightly cloudy appearance due to its natural vinification.

TASTING NOTES:
Rich, powerful and balanced, with an appealing nose of raspberries, cherries and a hint of smokiness. The ripe red fruits combine with powerful tannins on the palate with a long, firm finish. 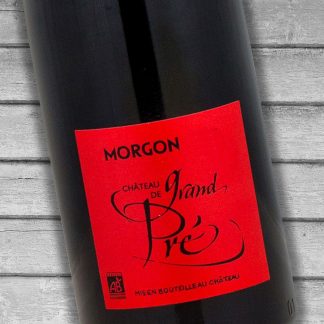