An elegant and opulent wine with lovely dark chocolate and cedar notes on the palate, textured and intensely flavoured.

PRODUCER NOTE:
Château Cantenac Brown is without doubt one of the most original buildings in the Médoc. John-Lewis Brown bought the vineyard in Cantenac at the beginning of the 19th century and built a traditional Tudor style château reminiscent of his Scottish origins. The estate quickly passed out of his family but his name will be forever linked to the château. Today Cantenac Brown has 42 hectares of sustainably cultivated vineyard located in the heart of the Margaux appellation, principally in the southern commune of Cantenac. The Cantenac Brown terroir is made up of gravel which ensures good drainage and Cabernets in particular do well in this soil; producing fine wines with intense bouquets which are suitable for ageing.

VINTAGE:
Generous flowering took place followed by a hot, dry early summer. August was slightly cooler and damper, followed by good weather in September, with cool nights and warm days enabling the grapes to reach perfect maturation. Harvesting took place when the berries had reached ‘red berry’ flavours, rather than ‘black berry’ ones. 2015 has been cited as a great modern Bordeaux vintage of excellent quality, with wines of great aromatic potential, with fine and round tannins.

VINEYARD:
The vineyard is managed in an environmentally friendly manner and Cantenac Brown holds the Haute Valeur Environmentale certificate (HVE3) level 3 which is the highest level. Only plant-based fertilisers are applied using a moderate and balanced approach in tune with the needs of the vines. The double Guyot trained vines are meticulously cultivated throughout the year, with pruning, removal of buds, leaves and secondary shoots; thinning out and controlled yields. The Cantenac Brown team uses traditional soil maintenance techniques to enhance the structural, chemical and biological properties of the soil. The soil is predominantly gravelly soil, with clay and sand.

WINEMAKING:
The grapes were harvested by hand, manually sorted and destemmed, before a secondary screening on vibrating tables with an optical sorter; only the highest quality fruit was vinified. Each plot was vinified separately according to variety and age, allowing for greater precision at blending. Fermentation lasted for 10 days followed by malolactic conversion in oak barrels and vats. The wine was aged in French oak barrels, of which 60% were new and 40% one year old, for a period of 15 months. Racking took place every three months and the wine was fined by egg white, prior to being bottled.

TASTING NOTE:
The 2015 is a wine of great substance and beautiful ripeness. The generous core of blackberry, blackcurrant, cherry and redcurrant fruit is enveloped in savoury roasted notes. It is opulent and rich, with fine-grained tannins which delicately coat the palate through to the endless finish. Classic Margaux. 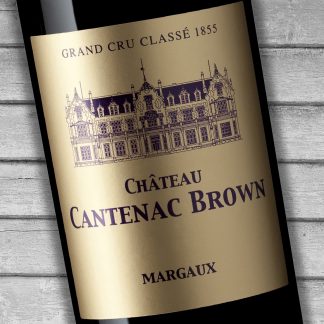