A classy and approachable Bordeaux with aromas of blackcurrant combined with bell pepper, all complemented by cedar oak and a touch of tobacco.

PRODUCER NOTE:
Following enormous investment and changes both in the winery and vineyard management, Château Cantemerle is a Fifth Classed Growth which is proud of its heritage and justifies its place in the 1855 classification. The Château is home to three temperature controlled vat rooms with a total capacity of 8,000 litres and the cellars are all air conditioned, housing over 2,000 barrels. The second wine of Château Cantemerle comes mainly from the Château’s young vines and is produced in the same way as its elder brother. Les Allées de Cantemerle has the same great personality as the Grand Vin, but is ready to drink earlier.

VINTAGE:
2016 has been lauded as an excellent and classic vintage. Bordeaux saw a wet spring in 2016, which built up the soil water reserves nourishing the vines throughout the exceptionally dry summer which followed. The glorious, warm, dry days were coupled with cool nights, perfect for grape maturation and concentration of flavours. Rainfall in September revitalised the vines. 2016 produced small, ripe grapes and the wines are marked by structured tannins, balancing acidity and superb aromatics.

VINEYARD:
Situated in the Haut-Médoc, the Château de Cantermerle vineyard covers 91 hectares of vines. The soils are silica-gravel, which are a result of a thousand year old erosion of the Pyrenees by the River Garonne and form one of the fundamental elements of this quality vineyard. The soils are poor in nutrients, so the vines ‘struggle’, resulting in grapes with a high concentration of flavour. In addition, the small pebbles in the soil provide a filter and contribute to the grape’s maturity by reflecting the sun’s rays during the day and retaining the heat during the cooler nights. The vines have an average age of 30 years and are planted at a density of 8,300 vines per hectare, yielding between 50 to 55 hectolitres per hectare. The vines are pruned to the Médoc Double Guyot method and are grafted onto the phylloxera resistant 3309-10114 Riparia Gloire rootstock.

WINEMAKING:
The grapes were manually harvested, destemmed, hand-sorted and then crushed. Fermentation took place in wooden conical frustum vats, which allow an intense, passive maceration of the cap and grape solids in the juice. Fermentation with selected yeasts lasted for six to eight days at 26 to 28 °C, followed by maceration lasting 30 days. The wine was aged for 12 months in medium toasted, three-year old French oak barrels. Bottled without filtration and just a very light fining.

TASTING NOTE:
A traditional and deeply coloured Bordeaux, with a delicate, elegant bouquet of blackcurrant and tobacco through to a smooth, silky palate with a touch of raspberry on the finish. 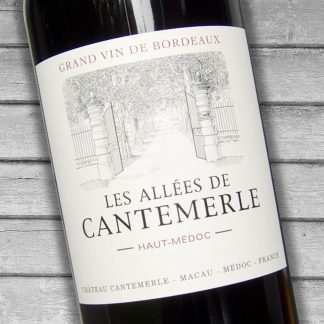