Easy drinking and exuberantly flavoured Australian red with some jammy sweet fruit and a hint of mint and black pepper on the finish.

PRODUCER NOTE:
It is the simplicity of the fruit, the sheer crunchy gluggable vivacity of the liquid, that first established Australia as everyone’s favourite vineyard. It’s what Broken Shackle is all about. Berton Vineyards is one of our longest-standing producers. Having established his own vineyard in 1996 in South Australia’s Eden Valley, after a lot of hard yakka Bob Berton purchased a state-of-the-art winery in Yenda, NSW, in 2007 and now sources fruit in the heart of the Riverina.

VINEYARD:
The vine age is varied, but all vines have been spur pruned and are generally trained on a single wire cordon trellising system. The vines are planted at approximately 1.8 metres apart with 3.6 metres between the rows, to allow machinery access. The soil styles in the vineyards are varied, with each terroir adding its own characteristic to the resulting wine.

WINEMAKING:
The grapes were fermented in stainless steel vertical fermenters for four to six days at temperatures between 26°C and 30°C on French untoasted and toasted oak. When the young wine reached 1° Baumé, it was pressed via screw press into stainless steel storage tanks and left to ferment until dry. It was then racked into stainless steel vats with French oak where it underwent malolactic conversion, resulting in a softer expression on the palate.

TASTING NOTE:
An easy drinking, full-flavoured Australian red, showing aromas of ripe plum and redcurrant over toasty mocha and spicy oak. The palate is full flavoured, with notes of rich plum, blueberry and mocha underpinned by ripe tannins which impart great structure and length to the palate. 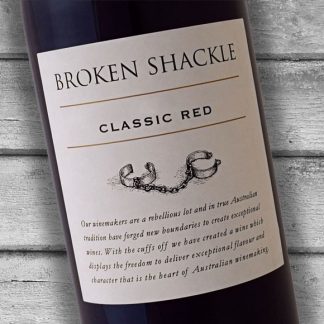